The screenshot below shows the new Speech palette through which you can add markup and preview speech. Click it for a larger image. 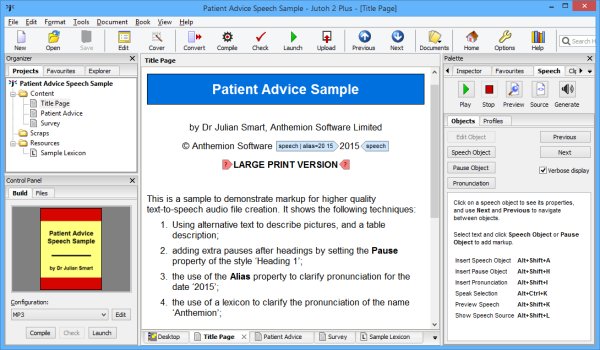 Speech markup lets you improve pronunciations, add emphasis, increase pauses between paragraphs, switch voices, and more. Jutoh generates SSML, SAPI or Apple Speech Manager code and also adds its own enhancements such as picture and table descriptions where provided by the user. Using styles, some markup such as pauses after headings can be achieved globally without needing to edit each occurrence.

The following screenshot from the Jutoh editor shows the use of speech markup to add emotion to a sentence, and conditional formatting to help orient the reader listening to the audio version. 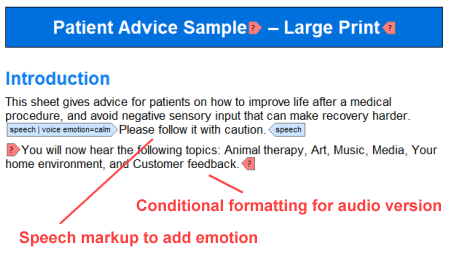 A single Jutoh project can generate MP3, Epub 2, Epub 3, Kindle, OpenDocument (for PDF creation or importing into a word processor), and HTML by selecting a configuration and pressing Compile.

To aid accessibility further, it's straightforward to create a configuration for large print by defining a point size increment. The speech sample adds 2pt to all fonts in the 'Large Print OpenDocument' configuration. 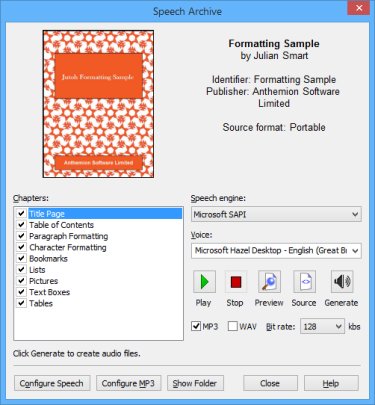 Jutoh introduces a new file type - the Speech Archive, with extension .sparch. The purpose of this file is to allow distribution of documents marked up for higher-quality speech, that can be used to generate speech MP3 files. A recipient of this file can open a .sparch file in a registered or unregistered version of Jutoh, and generate MP3 files after adjusting various settings such as voice, volume and speed.

Most voices are licensed for personal use, and not for distribution of the resulting audio files, and the speech archive solves that problem, assuming the recipient has a Windows, Linux or Mac computer. The speech archive is also a fraction of the size of a set of MP3 files, so it's easy to send as email.

The screenshot on the right shows the result of opening a speech archive file using Jutoh's File | Open command. It shows some basic information about the book, and has controls for playing or previewing the currently selected chapter, as well as generating MP3 files in the background.

To demonstrate speech markup features, Jutoh comes with a sample project called Patient Advice Speech Sample.jutoh. It's a short mock-up of an information leaflet, and you can download the output from the sample below. We are grateful to CereProc for giving us permission to use their Scottish 'Heather' voice for the MP3 files provided (and also for providing advice on optimising Jutoh for CereVoice).

This zip file contains output of the patient advice speech sample document in various formats: MP3, Epub, Kindle, PDF and Speech Archive (.sparch). The .sparch file allows you to compile a speech version of the document without needing the original Jutoh project; you can open it from the Jutoh demo using the menu command File | Open.